Home » Uncategorized » Why is the heart a symbol of love?

It occurred to me this week that I have no idea why the heart is a symbol of love. Without thinking why, I have always recognised the heart as an iconic representation of the nature of love – the two things are inextricably linked in my mind, as of course they are for most people in this country.

But this thought throws up several questions:

Why do we consider the heart as the source of love and other strong emotions?

Is this association universal, or is it just a connection that originates in the Western world?

When did people start to link the heart to the emotions?

When did we start to use the phrase “love heart” and the physiologically inaccurate “heart shape” that isn’t really the shape of a heart at all?

I’ve no idea of the answer to these questions but fortunately the internet provides a good few answers – although they’re not always in agreement.

Apparently there’s a symbol of a human heart as a metaphor for love in a mid-13th Century illuminated manuscript. So that gives us an idea of the answer to the question “When did the heart become a symbol of love?” but it certainly doesn’t tell us why. And nor is it by any means what we’d recognise as a “heart shape”. Indeed, the Wikipedia entry describes this particular heart as resembling “a pine-cone held upside-down, the point facing downward”.

The symbol itself apparently dates back far further than any written or even spoken language. According to The Heart in History, an article published by PBS (the US home of public radio and television), a symbol clearly recognisable as a heart was used by Cro-Magnon hunters in Europe, but of course we have no way of knowing “what meaning it held for them”.

A page in The Guardian newspaper’s Notes and Queries section poses a few suggestions as to why the heart is linked to emotion and therefore a symbol of love.  Allan from Wimbledon says that in the 2nd Century BC, Egyptian physicians studied the paths of the nerves in the human body and found that “the vast majority seemed to lead to the solar plexus in the chest. This gave rise to the theory that the heart was the seat of emotion and reason”.

Sounds like a “common sense” answer, but elsewhere, an article by Keelin McDonell at slate.com proposes an alternative. An image resembling a heart can be seen on coins issued in the ancient Greek settlement Cyrene (in present-day Libya). But the symbol is not a representation of a human heart – it’s a seed pod from a now-extinct plant called silphium, a medicinal herb so valuable in its day that it was harvested to extinction. The rather grim truth is that siliphium was used as a birth control measure by inducing a miscarriage. “The theory goes,” says McDonell, “that the heart shape first became associated with sex, and eventually, with love.” So if that theory is correct, it means a “heart shape” isn’t a heart at all – it’s a seed pod.

So, is the heart symbol universally associated with love and emotion? Almost, according to cardiologist Professor Dr. Armin Dietz, who has written a book on the Cultural History of the Human Heart.

His website calls the heart “probably the most popular non-geometric symbol” in the world “besides the cross”. According to his studies, “the red card-game heart as symbol of spiritual and physical love” spread from Europe across the world thanks in large part to “the Sacred-Heart cult as a religious sign which the Jesuits spread across the world”.

“Interestingly,” he goes on, “in Buddhism the playing-card heart also developed – independently of the Western metamorphosis – from the fig tree (the bodhi tree) into the symbol not of love, but of enlightenment. It was under such a tree that the ascetic Gautama found liberating enlightenment through years of meditation and became the Buddha.”

But while much of China’s cultural foundation comes from Buddhism, there could be a link between love and hearts in Chinese tradition.

“Guess what?” asks to the charmingly ebullient copywriter for the website goodcharacters.com, “When you pay close attention to the Chinese character, or hanzi, for Love you will notice a heart right in the middle of it! Amazing, isn’t it?”

Of course, it’s the nature of symbols that people will see them wherever they look, as you’ll find if you visit the website thingswithfaces.com:

It’s human nature to interpret the world in terms of stories and feelings and particular sights inspire drama and a sense of wonder and others, like this aerial view of a residential street in San Mateo County, California, just, well, warm your heart:

If you are looking for a gift for a loved one or just something special for your own kitchen or dining room that’s a joy to own, we’d be most grateful of you’d visit our website or “like” us on Facebook. 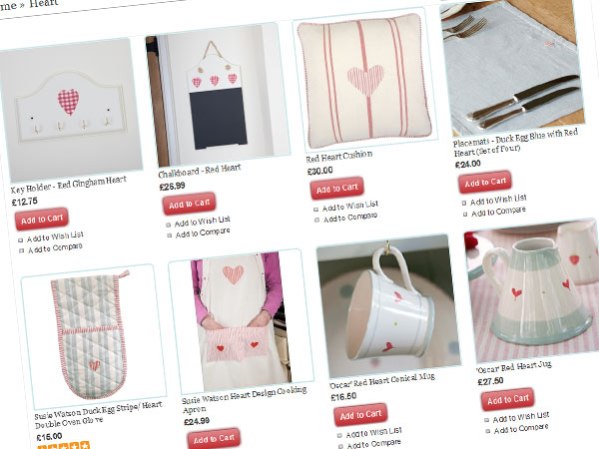 Our most recent posts

Search our blog by category